Ginhong’s technican had experimented the newly completed RB-300L vacuum emulsification mixer before the delivery to Thailand. Aftter making sure each component was flawless, our workers took apart the whole equipment into four pieces. The main mixing kettle was surrounded by iron pallet, and the other three are respectively packed in wooden cases. They were sent to Shanghai port in a truck on September 27th. 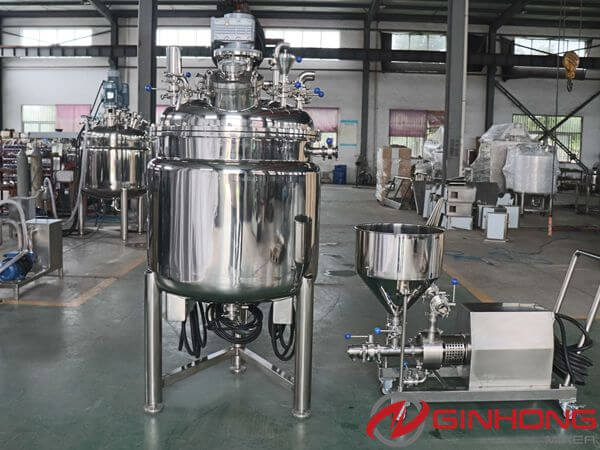 The 300 liters stainless steel vacuum emulsifying blender was customized for a new customer in food industry. And it will be used to make condensed sweet cream milk. This Thai customer is an expert in producing roasted coffee bean. Their headquarters is located in Bangkok, and affilicated agencies are in Chiang Mai and Khon Khan. They are the distributor for coffee roasting machine, such as Toper and Faema which are famous brand from Europe. Moreover, they have their own coffee shop and supply materials and corollary equipment for other coffee shops as well. Above all, they offer barista training and repair for coffee equipment. 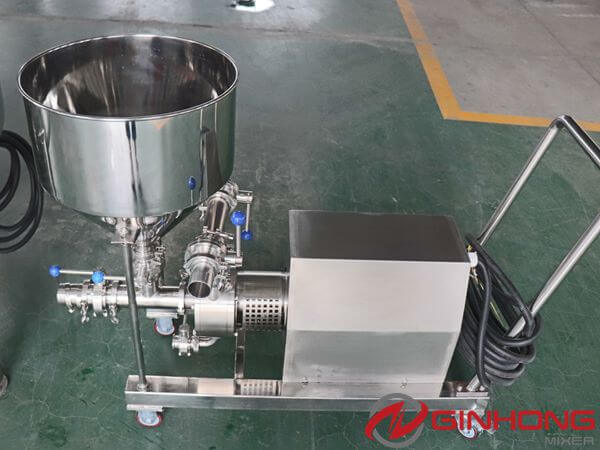 Coffee is darkly colored, bitter, slightly acidic and has a stimulating effect in humans, primarily due to its caffeine content. Coffee was introduced to Thailand in the early 19th century, but Thai people like coffee as much as Europeans. Thailand became an exporter of coffee in 1976. Now it has been one of the top coffee producers in the world and is ranked third among the coffee producing countries of Asia. Thai farmers mainly plant Robasta coffee beans and Arabica coffee beans. More and more coffee lovers are attracted by the coffee here, and the fine coffee industry is growing constantly.

Thai coffee is usually not made with syrup like Starbucks. Many coffee uses condensed milk. Condensed milk takes place of sugar and cream, which makes the flavor of coffee become more strong. Sweetened condensed milk has a thick and creamy texture. Just remember condensed milk is already sweetened so cut back on any added sugar. Besides coffee, condensed sweet cream milk is widely used in baking as well.

This RB-300L vacuum emulsifizer mixer consists of one 300L mixing vessel, one 3kw agitator motor, one 7.5kw inline homogenizer with hopper and guide wheels, 1.45kw vacuum pump, and an electrical control panel. The materials in the vessel will be heated by two 6kw electric heaters. A conical hopper mounted on the high shear mixer pump is for customer to add powder. The materials in the hopper can be quickly sucked to manufacturing vessel by vacuum pump. There are two hoses connected with the emulsification pump and the mixing tank for homogenizing the ingredients circularly and efficiently. 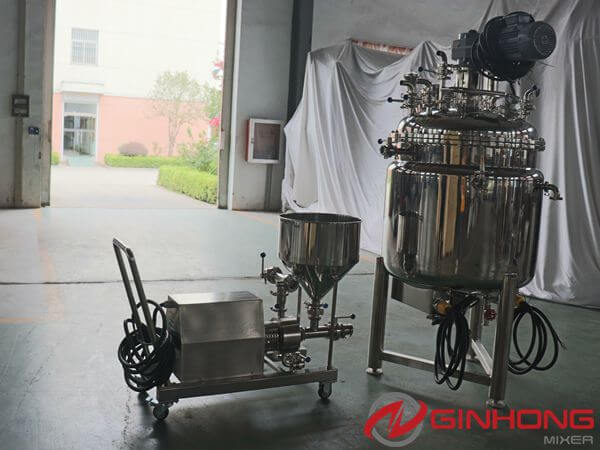 The constituent of condensed cream milk mainly includes water, sugar, palm oil, butter milk powder, whey and milk powder. Condensed milks have the advantages over fresh cream, for they can be safely stored for months without refrigeration. This was particularly useful in the days before electricity or modern refrigerators when dairy products would spoil rapidly — especially in hot climes or seasons.

Ginhong is a professional manufacturer in producing vacuum emulsification mixers for customers in cosmetic, pharmaceutical, food and chemical industries. You will find that Ginhong mixers are used in over 80 countries around the world. If you also have mixing and homogenizing needs, please contact us right now.