Does oil have water in it?

When oil reaches its dew point, it has a 100% concentration of dissolved water. Condensation causes fat to become cloudier as it gets cooler. The polar chemistry of the base stock and oil additions affects the dew point temperature.

Do oil and water mix together.

Oil and water don’t mix. They’re supposedly immiscible. It is because water is a polar molecule, meaning that one end of it is negatively charged, the other positively charged. Water molecules cling together because one water molecule’s positive end is drawn to another’s the opposing end. Because they are polar and have a small positive charge on one end and a slight negative charge on the other. These charges enable the molecules to create hydrogen bonds with polar molecules. However, oil molecules cannot establish hydrogen bonds. Water molecules will group in a container containing oil, and oil molecules will group in a container containing water, generating two separate layers.

What happens when you mix water and oil

Water and oil don’t mix when you add one to the other. Have you shaken water and oil before? If so, you are aware that they did mix briefly. That mixing, though, ends quickly! After a few minutes, you can recheck the container to see that the water and oil have separated. Can make oil and water mix for prolonged lengths of time. Just add an emulsifier, then stir.

Emulsifier for oil and water mixture

Physical barriers that emulsifiers create prevent droplets from aggregating. Emulsifiers are surfactants with both a hydrophilic (polar or water-loving) head group and a hydrophobic (nonpolar or oil-loving) tail. Lecithin and cholesterol, two emulsifiers found in egg yolks, help to create an oil and water mixture, respectively. Also, soap. It pulls water from one end and fat from the other. It behaves in this way when it cleans your hands.

Oil in water vs. water in oil emulsion 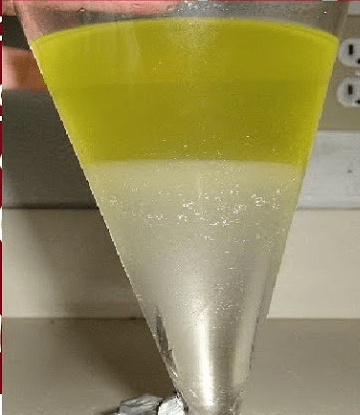 Dispersing one liquid into another immiscible liquid is known as emulsification. It can be created mechanically (using a high-energy) or chemically (low-energy method). In digestion, the small intestine is where emulsification takes place by breaking it down into smaller fat globules. Salts are then secreted and kept in the gallbladder.

The smaller globules of fat are broken down by bile salts, creating a milky emulsion. Pancreatic lipase breaks down these emulsified fats into fatty acids and glycerol. This is what is the significance of emulsification of fat because digestion and absorption of lipids depend on emulsification.

The emulsification process in cosmetics is o/w emulsions are used in moisturizing cosmetics and food items like milk, mayonnaise, and vinaigrette because they have a low oil concentration. They absorb water, are non-greasy, non-occlusive, and can be mixed with water. These emulsions use water as the dispersion medium while o/w emulsifiers keep oil droplets condensed in the liquid.
Emulsification in food processing is w/o particularly helpful in goods made for dry or sensitive skin, such as butter, margarine, cold cream, and cod liver oil. Sorbitan stearate, polyglyceryl oleate, lecithin, sorbitan monooleate, and lanolin are frequently used without emulsifiers.

Emulsion solution: How to fix a broken emulsion

The lighter oil droplets rise to the surface when the emulsion splits due to a density difference, causing creaming. The same principle underlies sedimentation, often in water-in-oil emulsions when denser water droplets collect on the emulsion’s bottom.

Emulsifiers are compounds that are added to a mixture to stop it from separating. You can fix this by putting a small amount of the broken emulsion in a clean bowl with a teaspoon of lemon juice (or water) and whisking it to create a new, stable emulsion. Pour the remaining broken sauce in once the emulsion has formed while continuously whisking.

You can prevent a mixture from separating by using emulsifier equipment:

Homogenization is the process of spreading solid particles evenly throughout a liquid or emulsifying two immiscible liquids. The advantages include increased product viscosity, shelf life, homogeneity, consistency, stability, flavor, and color. A substance’s particles can readily and easily join with the particles of another substance by having smaller particles. Additionally, it enables the particles to stay well mixed for longer.

High-shear emulsifier mixers use external mechanical force to reduce the particle size of liquid-liquid and solid-liquid materials to homogenize, disperse, and emulsify results effectively. Emulsifier tanks equally distribute components from one phase into another or several other stages.

A substance known as an emulsion is created when water and oil are tossed together and tiny droplets of one liquid spread over the other. Unlike oil in water emulsion, they contain thicker bonds. Now you have a guide on fixing a broken mixture with easy ways and the proper equipment.